Causes of Malnutrition in the Elderly 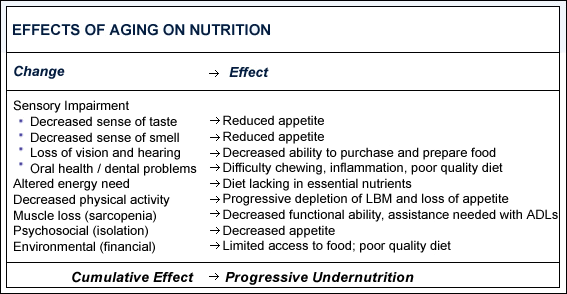 Aging is accompanied by physiologic changes that can negatively impact nutritional status.  Sensory impairment, such as decreased sense of taste and smell, that occurs with aging may result in reduced appetite.  Poor oral health and dental problems can lead to difficulty chewing, inflammation, and a monotonous diet that is poor in quality, all of which increase the risk of malnutrition.5 Progressive loss of vision and hearing, as well as osteoarthritis, may limit mobility and affect the elderly people's ability to shop for food and prepare meals.6

Energy needs decrease with age; yet the need for most nutrients remains relatively unchanged resulting in an increased risk of malnutrition.

Along with physiologic changes, the elderly may also experience profound psychosocial and environmental changes, such as isolation, loneliness, depression and inadequate finances.  These affect dietary intake ultimately impacting nutritional status.

Aging is also associated with decreased physical activity and progressive depletion of lean body mass.  Coupled with changes in the diet, this can lead to a loss of muscle mass, known as sarcopenia, decreased functional ability, and increased dependence on others to perform activities of daily living. Older persons who are obese are also at risk for sarcopenia because fat often replaces muscle mass, resulting in decreased functionality.559

The cumulative effect of the interaction between nutrition and changes seen in aging is progressive undernutrition, which often goes undiagnosed.  Early detection of malnutrition is important since it has been associated with diminished cognitive function, mobility, and a diminished ability to care for one's self.7